Rajasthan government has always tried to implement schemes, which will bring about positive change in the lives of the people. It also wants to expand digital development within the state, so that more and more people can get the benefits of internet and online payment of bills. The inauguration of the e-Mitra scheme was done in Rajasthan with the aim to bring overall development, in urban as well as rural areas. 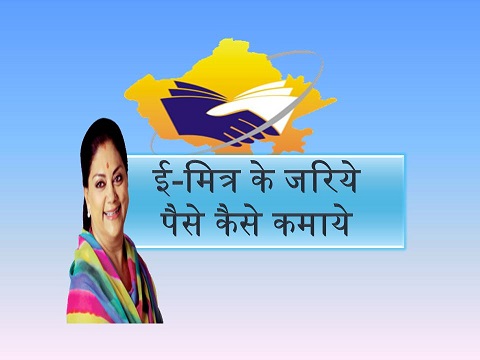 Number of e-Mitra kiosks in Rajasthan

In 2005, there were around 500 centers in the state. It went up to 800 kiosks in urban areas and 100 in villages. According to a report, by 2014, the number of e-Mitra centers reached a whopping 1500 in cities. Surprisingly, the popularity of these centers was more in rural areas, as there were 5500 kiosks in rural regions during the same year. Recent data states that Rajasthan has as many as 45,835 e-Mitra kiosks.

Which services are available in e-Mitra centers?

Around 50 to 60 different services are available at the e-Mitra store. Some of them are payment of water bills, electricity bills, taxes and telephone bills. Apart from this, one can also attain voter or Aadhar card from this centers. In case a person needs to get a driver’s license, caste certificate, PAN card or other documents, he/she can get it from the e-Mitra store.

How much can a kiosk owner earn?

The amount of money that an e-Mitra kiosk owner can earn on a monthly basis depends on several factors. In case the center is located at a premium location, then it is possible to earn anything between Rs. 35,000 to Rs. 40,000. If the store is in interior regions, a monthly income of Rs 25,000 can be assured. The more clients the kiosk owners serve, the better will be the monthly earnings. So, it is safe to say that a kiosk owner can expect to take home anything between Rs. 25,000 to Rs. 40,000 on a monthly basis.

How does one make money under this scheme?

Every client will have to pay a certain fee in order to get a task done. If he/she needs to pay any bill that is issued by the Rajasthan state government, then the kiosk owner will not take any charges from the client. For the payment of government bills, state authority will pay Rs. 2 or Rs. 3 in the kiosk owner’s account.

Eligibility to apply for the kiosk

Cost to open the e-Mitra kiosk

A rough estimate shows that one need not spend more than Rs. 30,000 to open the e-Mitra kiosk. This amount includes the registration charge of Rs. 5000 that every applicant has to pay during the submission of registration forms. Other gadgets, which the e-Mitra kiosk owner will require is:

How to apply for registration?

For offering better service, registration of any complaints, getting in touch with state revenue department and offering feedback, kiosk users can download an application on their phones. The app has been launched by Rajasthan government, and can be downloaded from the link https://apps.mgov.gov.in/descp.do?appid=554&param=app, free of cost.

As per data, it has been one of the most successful schemes, implemented by the Rajasthan government. The state is also earning a lot of revenue from under this project. Apart from helping people in easy payment of bills, it is also a lucrative income source. Thus, Rajasthan government can also address the unemployment issues. It is one scheme that has multi-pronged benefits.